There are days when the positives shine through. When I seem miraculously able to focus only on Evy’s progress, and rejoice in it. When I am able to stand on the side of the riverbank and observe my worries as they drift by, without attaching myself to them. Today is NOT one of those days. And you know what? Yesterday wasn’t either.

Yesterday, the official report came from our neurologist in Winnipeg, and that letter kind of lowered the boom on me. Even though we obviously already knew everything it was going to say, somehow, seeing it laid out on paper cemented things for me.  All of the possibilities for diagnoses (thank goodness his conditions are so specific that there are really only 3-4 likely diagnoses) were ranked from least likely to most likely, with their corresponding prognoses & disabilities listed. There was something so cold about that. So finite. The radio in my head began to run…”If he has THIS, then he might actually regress further…oh my god…. But if it is THIS option instead, then he may stagnate…I really don’t like that either…” and on and on went that damn radio.

The worst part to read was in regards to the condition the Dr.s are certain he has: RNAse T-2 Deficient LeukoEncephalopathy. The dreaded line read “Unfortunately, there are only about 50 reported cases so far.  As a result, we do not have very good information on the long term prognosis of the disease.”  I do NOT do well with uncertainty. I don’t even enjoy not knowing what my daily routine will look like, let alone uncertainty about my babies’ likelihood to thrive! My heart began to shatter again, and the tears welled up in my eyes. All I want is someone to tell me that my darling bug WILL LIVE A LONG LIFE. That he will THRIVE. The fact that no one can say that hurts my heart to no end. I felt physically sick the rest of the day, and when Lydia went down at 7, I decided I should turn in as well, and end the dreary day.

Upon waking this morning, my heart felt just as heavy. Sadness can be so suffocating, and almost disorienting. Scott was going to head in to work to get ahead with some paperwork, but when I broke down crying in the kitchen while the coffee brewed at 7:30, he agreed to stay while I worked through my emotions. (Side note-how lucky am I to have this man as my husband? Incredibly lucky indeed! He doesn’t complain about the hours of extra paperwork practically ever, or about rearranging his routine for myself or the little ones. In fact, he barely complains about anything in life. Love him so much!) I took my coffee, and headed back to the bedroom, unsure of what I was going to do to move through my emotions.

As I have learned over the last number of months, the only way out is through those emotions; squelching them only gives them more power, but over-acknowledging them (is that even a real term? No idea, but I used it anyways!) or dwelling on them is equally destructive. I sat with my cup of coffee (oh coffee, how I love thee!), and began reading my new book “What Alice Forgot” (it grabbed me right from page 1!! I could barely put it down!), and when I finished chapter 3 it hit me: I needed to write. That is one of the purposes of this blog, isn’t it? To help me process? Yes, it absolutely is. The radio in my head piped up again: “Be careful, writing might hurt”…and I just about stopped myself. But, wasn’t I already hurting anyways? So, I gathered my courage, and reminded myself that the only way out is through.

Shortly after I began this post, Scott came in to the room (I’m a grumpy bear quite often in the mornings, I was momentarily annoyed at being interrupted when I had just begun my way through the emotions. My poor hubby, ha!!). He was carrying our Evy-Bug, who had just woken up. He looked right at me and smiled hugely, with his big blue eyes sparkling and crazy blonde hair all messed up from sleep, so full of joy to see me. And that was all it took. That connection with my bug, his snuggles, his smile, his genuine happiness; that is all I needed to flood my aching heart with warmth.

As we sit at the table now, with Evy enjoying some breakfast right next to me, being absolutely cute as hell (as always), I am once again unfailingly aware of the fact that 6 months ago, we were in such a different place. Such a darker place. Evy was saying no words at all. Zero words. In fact, he was barely ever even TRYING to make verbal sounds! He would only turn and look at us when we called his name maybe 1-2 times out of 10. And mealtimes were very stress-provoking, because he would either refuse more than 2-3 bites of the same old 5 staples (crackers, toast, squishems, nutrigrain bars, yogurt), or would begin to eat with vigor, but then choke or gag so horrendously that any interest in food would vanish yet again. We had no professional help yet, I felt like I was all alone, attempting to clamber my way out of quicksand…only to be dragged further down.

I am filled with gratitude that NOW is actually a much brighter time. Our bug is now trying (and succeeding!) to talk with all his might! He says “Cody” most often, “Lydia”, “where Cody?”, “hi”, “hello”, “go”, “go out”, “what doing”, “fishy”, “Gussy”, “daddy”, “mama”, “ow”, “cup”, and probably even a few more. He is trying new foods, and even though those are mostly cookies and treats, who cares?! This is the first time since he was 14 months that he tried anything new at all! VICTORY! He is getting stronger with his gross and fine motor skills (he can climb stairs with stability, color, work the iPad functionally, and more), muscle tone is coming along, and he is such a social little bug. Progressing in every way possible. We have wonderful professionals (therapists, Drs and specialists) involved and invested in Evy, and he even started at our big daycare centre in town this last week (Kiddie Korner Daycare). He loves it so far! I can’t wait to see what he does next!!And now, I am smiling, with a warm fuzzy feeling in my soul.

And the radio says “See Lace? Despite some clouds in the sky, this is definitely a brighter time, mama bear.” 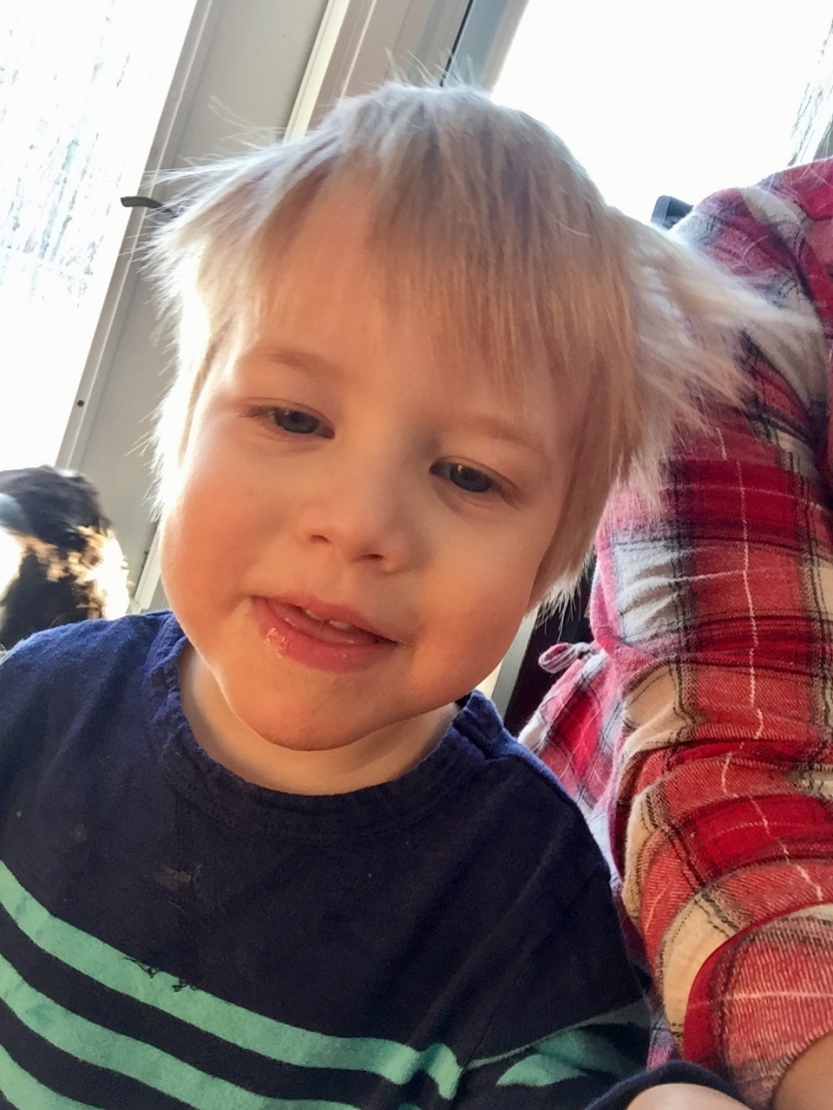