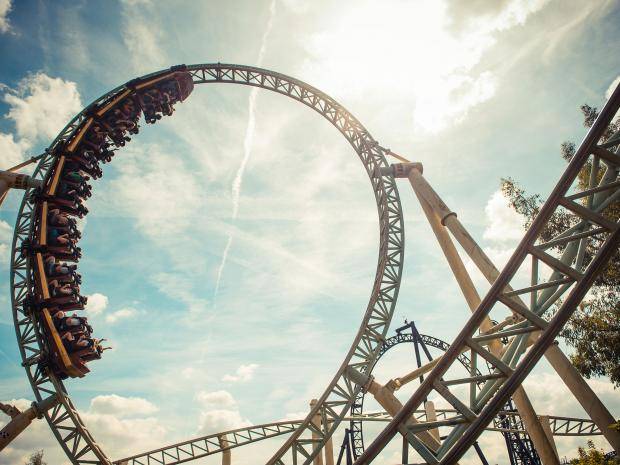 We progress…we stall out. He has a great day….he wakes up hysterically crying that night. He is Mr. Easygoing…then suddenly his little world seems to be ending, and I am powerless to solve it because he cannot verbally articulate to me what is going on for him. I go to bed last night feeling blue, weepy, and overwhelmed…and wake up to a bright & happy day full of new revelations. Talk about a rollercoaster!!!….

Evys emotions are running at a much higher intensity these days than we have been accustomed to EVER in his lifetime. He has much more specific things in mind that he would like to do, and re-directing him doesn’t come as easily as it once did. “Mr EasyGoing” is not always so any longer! I wonder: “Is this actually a POSITIVE? A good sign that he is actually moving along developmentally? So, instead of being around the 18-24 month age range, he is actually more like a 2 year old now?” Well, most likely that answer is YES. YES, it is likely an encouraging thing to see him having his own opinions, and entering what most parents refer to as “the terrible 2’s”. At least he isn’t stuck in babyland forever, hooray for development!! BUTTTT…that doesn’t mean it is easy to handle as his mama. It is rather emotionally, and physically, DRAINING. And yesterday night, this mama was SPENT.

Poor Bug has had a much more difficult time going to sleep lately, much as he used to when he was smaller. Bedtime is about 3 hours of him remaining awake, sometimes crying, sometimes playing, sometimes screaming, until about 11 PM. Nights like that, I wish even harder than I normally do that he could verbally TELL ME what the issue is, and how I could help him. But sadly, this isn’t the place we are at. And afternoon naps? Well, those haven’t been going well either!! So by yesterday, I decided to see if it might be time for us to scrap the afternoon nap in favor of a slightly earlier bedtime (around 7:30) and HOPEFULLY a decent nights sleep (fingers crossed!!). We skipped the afternoon nap, and he did fairly well!! No ginormous meltdowns, just a few tired spells and a few tears when being told he could not do a desired activity. And guess what? Bedtime last night was a BREEZE!!! He went down beautifully by 8 PM, and slept all. freaking. night!!!! We tried the same thing again today, foregoing the nap and opting for outdoor snow time, so please everyone cross your fingers that tonight continues along that positive trajectory!!

Sleepytime woes aside, our biggest pitfall lately is that when we need to tell Evrett “no” about something (most of the time that something is playing in the water at a sink in the house. He ADORES water!!), no matter how gently we do it, his eyes well up with huge tears, and he cries as if the universe is crashing down on him. This may sound like typical behavior, and to an extent I will admit that any child may do this at times, but the thing that makes it different with Bug than with our other children is that I have no idea if he understands WHY I am saying no. Does he understand that I am not trying to upset him? Does her understand that I am only trying to keep him safe? Does he understand that we are heading out to do something even MORE fun than play at a sink? Most of all, does he understand that I LOVE HIM more than words can even say, even when I have to say “no”??!!  So far, I can NEVER tell. And THAT is what makes saying “no” so very difficult for me. His tears cut straight in to my heart, and although I stick to my guns, it damn near kills me. I will fully admit that half the time I end up in tears too.

Sometimes we need an outside ear to listen in, someone to give us new suggestions for how to go about things. Lucky for me, I had a visit arranged with a good friend of mine yesterday, who is also Evys Speech Pathologist (I will call her “K”, for privacy purposes).  We talked about all sorts of things, and touched on the major issues (sleep, and saying “no”) that are upsetting darling Bug lately. We discussed foregoing naptime to see how nighttimes go as a result, afterall he is 3 now, many children outgrow the need for daily naps between the ages of 2-4. She thought that was a great thing to try! Yay!! And we also talked about making and trying out a new daily activity picture chart in the house: this would allow Evrett to SEE what IS an option at specific times, and what is NOT an option. For example: if he comes to me, dragging my hand to get the iPad (when I don’t want him having more meaningless screentime that specific day), instead of relying on VERBALLY trying to explain “Sorry Evy, but no we cannot play on iPad right now…..” when we don’t even know what he registers with all that yacking, and then hoping that he understands why I am saying no….I can take him over to our family chart, point to the options or the time of day we are at, and visually SHOW HIM!! I can say something such as: “oh no sorry Evy, iPad has an “X” over it right now, BUT we can do outside time or snack time!! Do you want to go-go-go outside? Or would you rather eat-eat?” to go along with what he SEES, and even sign as I talk. I’m sure this adjustment will take a while once we implement it in the next couple of weeks, I don’t expect it to be some sort of miracle cure for all his tears, but I DO think that given how well Evy responds to auditory and visual cues that this will only help him in understanding that we cannot always do exactly what we want to at the exact moment we want to do it.

I also downloaded and tried a speech development app that K recommended called “Speech Blubs”, and Evy LOVES IT!!!! This app is both educational AND fun!!  First, the app asks a few starter questions & tells you whether or not to seek the help of a specialized SLP (Speech Language Pathologist) for your child prior to beginning. Then, you get to move on to rudimentary things such as animal sounds, shapes or colors. This afternoon, Evy and I did 10 mins of Animal Sounds (10 mins is the amount of time recommended by the app creators). He didn’t seem to participate actively by trying out sounds while we were doing this, but the tutorial had assured me that as long as your child is engaged and enjoying, he/she will be learning and soaking things up…so, we finished our 10 mins and then went outside. Once we came inside, we were heading downstairs for some movie time, and Evy began to make animal sounds!!! He did monkey sounds and the “roar” of the lion just as we had seen on the app an hour prior. WOW!!!! He was super proud, and I was over the moon!!!!! We will DEFINITELY be continuing our time every day with Speech Blubs, and happily continuing after our free 7-day trial with the $12 CDN per month!!

As if this wasn’t enough, Evy also began to say “milk” today!! Any new word is SUCH a blessing!!!! AAAAAND he has finally coordinated the movement of kicking a ball!!!!! Goodness, what a high these developments put us on!!!!

(Oh and FYI Evy went to bed like a pro at 8 PM AGAIN tonight, and hasn’t made a peep now that it is almost an hour later! WHOOP WHOOP!!!!)

Last night at this time I was on a downward spiral on the dreaded rollercoaster ride. I was feeling despondent, overwhelmed and as if somehow it must be MY fault that certain things have become tougher lately (I tend to blame myself, ALOT, I think many mamas out there do this!). All I wanted was to cry and sleep the blues off. Today, it has been a fast upward race to the top of a happy peak!!!! Exhilarating, and so utterly encouraging!!!! Tomorrow? Who knows….

I am blindfolded on this rollercoaster.

I have no magic crystal ball to tell me how the progress will go from this point out. I don’t know if he will stay asleep tonight, or wake suddenly screaming. I don’t know if he will use ANY words at all tomorrow, or if he will be fairly silent. No idea if he will throw a sad tantrum when I inevitably have to say “no” to one thing or another. I have not a hot clue how our plan with the visual activity chart will play out either….it could be an absolute disaster, or it could be a godsend….

But one thing I KNOW for sure is that there will be ups, and downs. I KNOW some days/weeks will be more encouraging than others. There will be laughter, there will be tears. But no matter what, both Scott and I are buckled in for the ride. We love our bug so deeply.

~If anyone out there has supportive comments or suggestions for my posts on Evretts journey, or if you are simply a parent of a child with unique needs and want to connect, please comment!! Or click “follow”. Thank you.