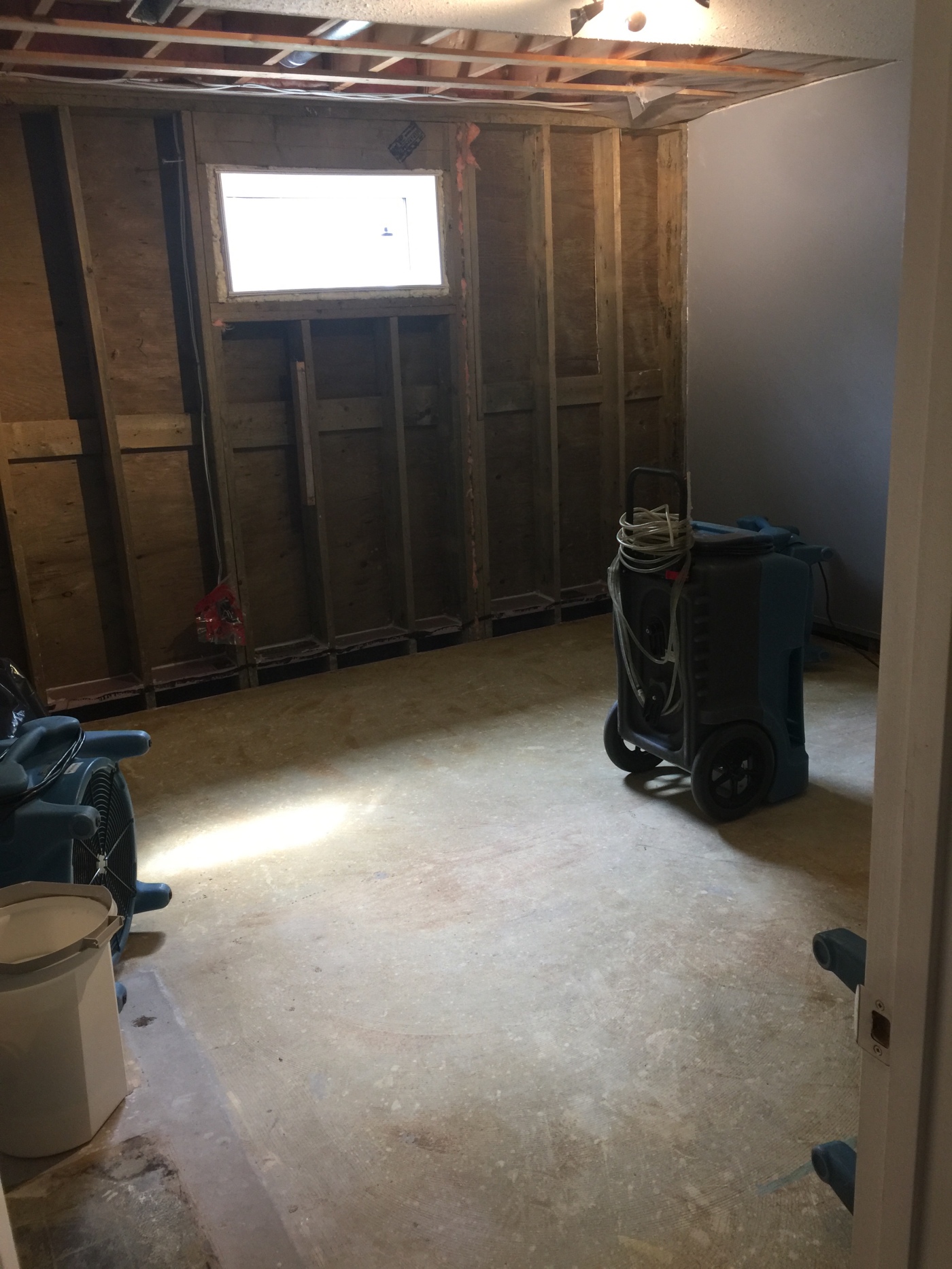 Yes, you read the title correctly. Minimalism, or living simply & with greater intention, absolutely allows me to care less. (On the flip side, it also allows me to care MORE about the things & people that truly matter in our life, but that’s not what today’s post is about)

Shortly after we moved to my hometown, in to what we thought would be our forever-home, our newly organized basement flooded. There was a long period of massive rainfall in our region, and the sewer backed up…needless to say, it wasn’t pretty. The majority of the basement had to be ripped apart and totally re-done. It was a HUGE job, but with the help of a fantastic contractor, we finally finished it just over 1 year ago.

NOT. so. much. ….As we returned home from our family holiday this last Sunday evening, little did we know the surprise that Monday had in store for us. We woke up comfortable in our own beds that day and thought “what do we want to do today?” (it was a holiday here in Canada, so Scott was home from work). We threw around some ideas; unpack, Scott would get some yard-work done, I would workout, and then we’d see what we felt like after that. The universe laughed at us, and thought it would be fun to send us another water issue in our basement instead!!

Scott came inside briefly to take some shelter from the heat after mowing the lawn, and turning on the sprinkler. He headed downstairs to grab something (I’m guessing he needed some ice cream!), and a moment later I heard him yell “We’ve got a water issue down here!!” A pipe had burst, and water was literally filling up our walls & ceiling in the workout room, and even pouring steadily through around the shower/tub!! Y-I-K-E-S!!!!!!

Thank goodness Scott caught it as soon as he did, and that he’s handy enough that he made the flooding stop. Fast forward a couple of days, and this is what our “newly re-done” basement looks like now: 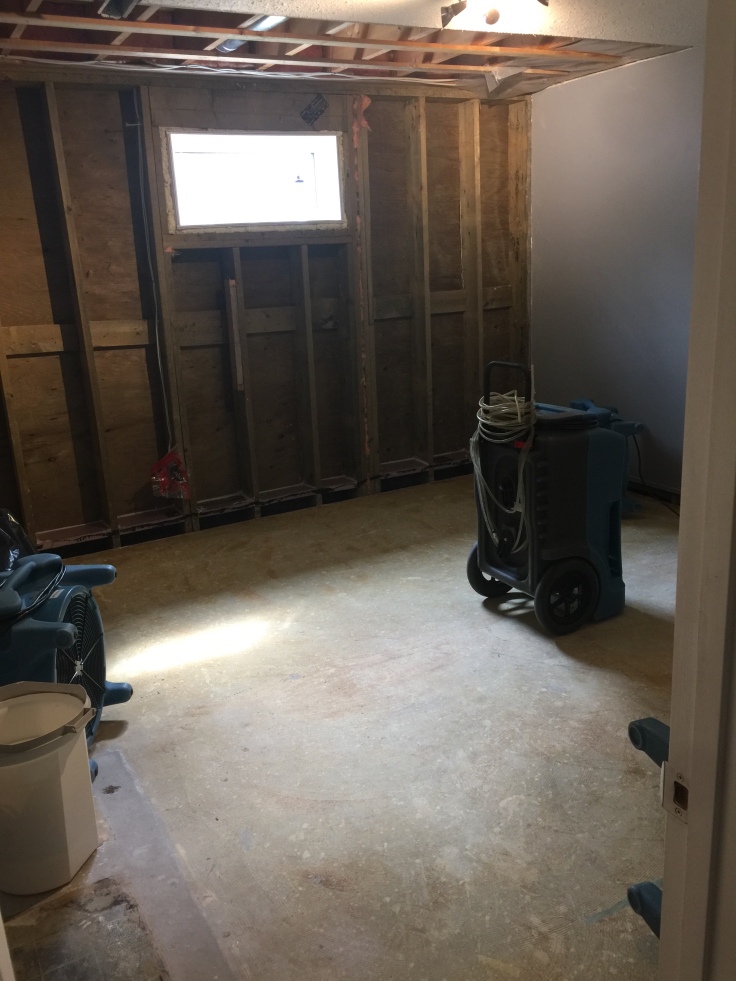 You might think that I must have been steaming about all of that recent work going to waste. That I’m filled with anxiety thinking about how much time it might take to get this all finished & put back together again. Or maybe I shed some tears, thinking about how this is “the last thing we need right now”. That after what seemed like an infinite amount of hours spent organizing and setting up those rooms, everything was completely messed up when we had to throw it anywhere else that we could to make room for the guys to work. I COULD have thought & felt all of these things…and the truth is that I briefly did! But it was fleeting. Those reactions came & went; they simply floated by me, as if I was watching them from a riverbank, barely affecting my overall mood or state. Scott was quite shocked that I took in stride the way I did (and so was I!); afterall, HE is usually the one to keep his cool (which he did, as he almost always does!) and I am usually the one who has to react more outwardly with tears and/or anxiety at first, and then work on my emotional health afterwards to get back on a more level path.

Why was I able to care so little this time?

One word for you: Minimalism.

I’m not joking. Becoming more intentional about how we live, and the stuff that we choose to accumulate and hang on to, has meant that I have been able to let go of my attachment to a lot of material items. Whereas I once placed much emphasis on the feelings of memories being IN certain things, such as baby clothes, I now take comfort in the fact that the memories are actually in ME. No disaster could ever take them away. And that is incredibly comforting!!

I once felt like we needed every square inch of room in this big 5 bedroom 4 bathroom house in order to live in an uncluttered manner as a family of 5 with 2 pets…and probably also to feel like we had “arrived” in society somehow…but I now know that is totally untrue. Having less items means that not every corner or space is filled, and it isn’t a hardship for us to live a little while without that area of the basement at all.

Sure, I’ll admit it’s inconvenient. It’s not as if I would have hoped for this to happen, that would just be goofy. It’s just that I simply don’t care much. We have what matters: our 2 darling boys, our beautiful baby daughter, our sweet English Springer Spaniel named Gus, and our eternally sweet black cat, Bynx (anyone who loved the movie “Hocus Pocus” will get that tribute!). We have a roof over our heads, food on our table, clothes on our backs, our health, and each other’s love & support.

Some may wonder what this “minimalism thing” is all about for me, for US. Well, here you have it. None of what truly mattered in our lives was in that basement, because the things that truly matter are actually not things at all. This is something absolutely true that becoming more minimalist has instilled in my heart & my very being. And it has freed me from the reactions and emotions that normally would have plagued me if this had happened even a few months ago.

For this freeing clarity, I have to say thank you to Joshua Fields Millburn and Ryan Nicodemus (for those who may not know, they call themselves “The Minimalists”; they have a wicked podcast, a fantastic documentary on Netflix, and 3 books out as well. Go check them out!). Thank you both for introducing me to this beautiful world, where simplicity & intention bring happiness & calm. (Even amidst yet another basement flood, ha!!)

Thank you, minimalism, for helping me to care both so much less, and so much more.

2 thoughts on “Minimalism allows me not to care…”